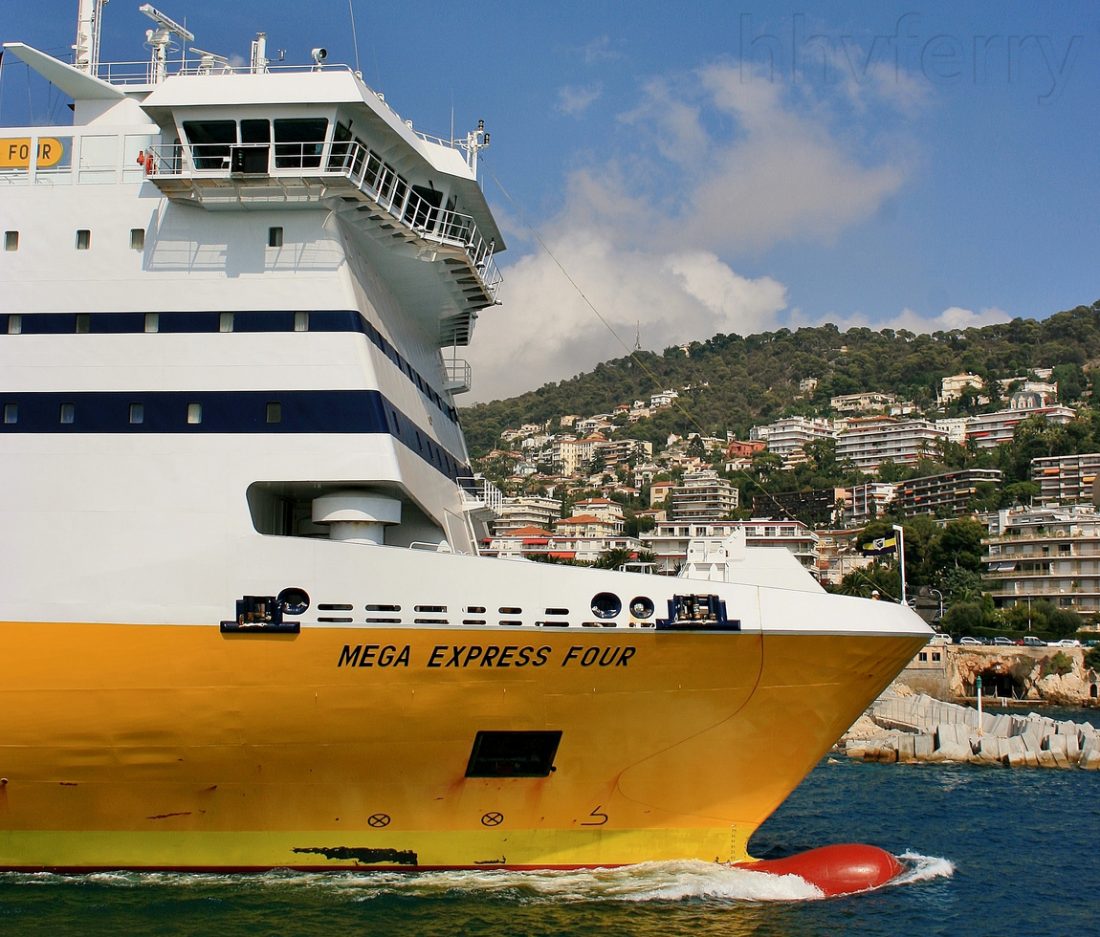 In early February 2021 it was confirmed that Irish Ferries were chartering the Mega Express Four from Corsica/Sardinia Ferries for a two month period to provide refit cover on their Irish Sea services. An established northern ferry European operator chartering a vessel from a southern European operator is rare indeed but with the pool of suitable ships seemingly sparse Irish Ferries have secured for themselves an interesting ship which was very significant when newly-built and which has been more widely-travelled than almost any other ferry in Europe.

The ship was originally the Superfast II, delivered in 1995 and the second of a pair of vessels built for Superfast, a new ferry operator established by the Panagopoulos family, former owners of Royal Cruise Line. Together with her sister the Superfast I she revolutionised cross-Adriatic services with a high service speed reducing passage times from Ancona to Patras to under 24 hours enabling fixed scheduling and requiring only one night at sea. Painted red and with distinctive wing-tipped funnels the vessels, and their operator, enjoyed a carefully crafted public image and the service proved very profitable throughout the late 1990s during which time a further ten Superfast ships were ordered both to improve on the original pair and to expand operations elsewhere.

By the summer of 2001 Superfast’s Adriatic service reached its peak number of ships with six vessels in service and two more on order. The arrival of the final pair in 2002 (Superfast XI and XII) allowed the second generation sisters Superfast III and IV to be sold to Spirit of Tasmania, the state-owned entity which operates services from Melbourne in Victoria to Devonport in Tasmania. There they were renamed Spirit of Tasmania II and Spirit of Tasmania I, providing a new standard with daily departures from either end. Having seen the success of that pair of ships the company investigated acquiring an additional vessel to open a new service direct from Sydney to Devonport and, in connection with this, the Superfast II was purchased in 2003, becoming the Spirit of Tasmania III.

Despite starting out with high expectations the Sydney to Davenport route was unable to prove its viability and after just three years the Spirit of Tasmania was sold on again, this time to Corsica Ferries who continued to build up their high-speed conventional fleet as they sought to overcome entrenched competition in their core Corsican market from state-owned SNCM. Renamed Mega Express Four, after a brief spell in service late in 2006 with only minor modifications the ship was sent to Greece for a significant rebuilding which, amongst other changes, added passenger accommodation at the stern.

Before stepping on board the Mega Express Four there are a couple of things to point out about Corsica Ferries.

Firstly, they are a very, very successful company, having grown from nothing to dominate their core market of passenger and car crossings between France and Corsica (despatching the incumbent, state-owned SNCM along the way and seeing off attempts by other private sector operators – in particular Moby Lines – to carve out a meaningful presence).

Secondly, when they buy ships they tend to redecorate them in a particular style – and that style has essentially not changed for more than 30 years. The company’s ships all have a particular look, a template which has been resolutely stuck to for decade after decade as new ships (including fast craft) have been built or purchased and converted. The Corsica Ferries aesthetic is singular, very retro and very distinctive.

To illustrate the point, here is a page from their 1987 brochure. Some of the same colour schemes, carpet patterns, even chair designs are common between the Mega Express Four and this image.

Here, then is the Mega Express Four. She is no longer quite the greyhound she was as built, nor is her freight capacity any longer game-changing. But she is a comfortable and reliable ship operating for a company which works their ships with quite ruthlessly busy schedules through the summer but which usually gives them plenty of maintenance time outside that period.